Ole & Lena at the State Fair

“Ole & Lena at the State Fair” will be available as a live stream on Tuesday, July 13th only. This ticket will allow you to watch the performance in real-time as the performance is happening on stage. One ticket per household.

“Ole & Lena at the State Fair” will be available On Demand starting July 14, noon – July 15, 10pm. This ticket will allow you to watch the performance at a time you choose between July 14 – July 15. Once you start the stream, you will have 48 hours to finish watching. Your viewing link is unique to your purchase and cannot be shared or streamed more than once.

Purchase ticket for On Demand.

The calendar has finally turned over to Ole’s favorite event of the year – State Fair time. Unfortunately, Lena doesn’t share Ole’s excitement. For years Lena has been in countless competitions with her arch-rival Elaine Danielson, always battling, only to end up with a tie for the coveted blue ribbons. But this year Lena has a new trick up her sleeve that she’s sure will tip the balance in her favor. Ole, on the other hand, has his own fair surprise this year. Ole heard on CCO that Sweet Martha makes a truckload of money at the fair so Ole and Sven have decided they’re going to turn the Fair into a money-making operation with a food stand of their own. Their goal is to come up with something they can stuff on a stick and get them on TV with Frank and Amelia. But when it comes time for the leave for the Fair, Lena is nowhere to be found. Can Ole find Lena in time to spring her surprise on arch-nemesis Elaine? You’ll have to see for yourself at “Ole and Lena at the State Fair.”

Presented by Paramount Center for the Arts 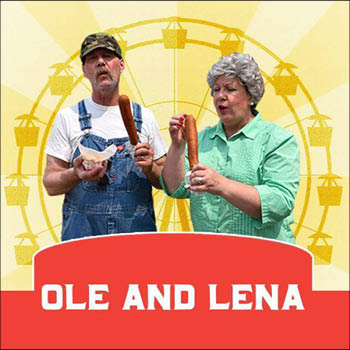